Arutprakasa Vallalār Chidambaram Ramalingam (5 October 1823 – 30 January 1874), whose pre-monastic name was Rāmalingam, commonly known in India and across the world as Vallalār, also known as Ramalinga Swamigal and Ramalinga Adigal, was one of the most famous tamil Saints and also one of the greatest Tamil poets of the 19th century and belongs to a line of tamilsaints known as “gyana siddhar” (gnana means higher wisdom).

‘You need not die. You can live in this world in deathlessness.’  from the Arutperumjothi Agaval by Swami Ramalingam. 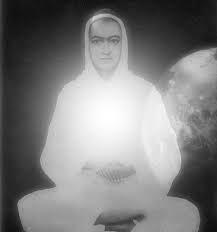 Swami Ramalingam evolved a unique philosophy called ‘Suddha Sanmarga’ (the path of Light) and wrote 6000 verses on Jothi – the Light –  and on the state of deathlessness or immortality.  The Arutperumjothi Agaval consists of 1596 lines and systematically sets out his philosophy and his personal experience of manifesting the triple light body, overcoming death of the physical body and culminated in the disappearance of his physical body into the Light.  On January 30, 1874, Swami Ramalingam entered his one-room residence Siddhi Vilakam, ordering his followers not to open the door as they will find nothing, and he locked the door.   Five months later the Government forced the door open and the room was empty, with no clues.  The body of Swami Ramalingam had merged with Arutperumjothi  as he had predicted.

From birth he had an extraordinary life with many manifestations of his exalted spiritual nature.  At the age of nine years he already penned some of the ecstatic and complex verses of the sacred Thiruarutpa, the Divine Song of Grace, which consists of about 6000 devotional verses.  Many of Swami Ramalinga’s works are only available in Tamil and have not been translated into English yet.

Swami Ramalingam was the fore-runner of the Theosophical Society and movement and Helena Blavatsky herself admitted to this in The Theosophist of July 1882.

The term ‘Sanmarga’ (the good path) he adopted from Saint Thirumoolar.  He realised the spiritual foundation of the ancient ideals of the seers and sages of Tamil. He brought the new truth of the pure divine light to ancient traditions and established Samarasa Sutha Sanmarga Sanga Sathiya.  Translated into English it encompasses the following universal principles :

His written work the Thiru Arutpa, a collection of poems, focuses on how to live the life of eternity in a physical body.  He systematically explained, through his verses, how the divine expresses in the human body and how it transmutes an impure mortal body into a pure immortal body of Bliss.  He pronounced, that through the Vast Grace Light (Arutperumjothi) any one can rise to this state by leading a conscious inner life.  He demonstrated that although man’s outer body remains visible and physical and appears to be unchanged, it is no longer a decaying impure body.  Through spiritual practice , through divine knowledge and the in-dwelling Light, man gains the triple body of Suddha, Prana and Gnana Deham and lives for ever.

So let us proceed to follow the life and manifestation of Swami Ramalingam through his written word.

In his speech known as The Great Sermon, he says :

His teachings were based on the following universal code :

All animated bodies are the natural expression of God and therefore a universal brotherhood exists and one should view everyone as himself.

Killing in any form and the eating of meat should be avoided at all costs.

God is one and one only.  He is to be worshipped in the form of the Vast Grace Light.

It should be the aim of every Jothi swaroopee to aspire for the immortal state, while on earth, by transmuting this physical body into a transparent deathless one.

When this state is realised, those who have attained this level of bliss, should make all beings realise this same level of bliss.

Swamiji wrote about the triple body.  The first body is called the Golden or Pure Body, the Sudha Deham.  The body acquires some remarkable characteristics and supernormal powers.  These supernatural powers he calls Karma Siddhis and he says they are only possible with the manifestation of the suddha deham.   These siddhis include Ishatvan – the attainment of all divine powers : the yogi is able to restore life to the dead.

In many of his verses in the Agaval, he affirms that he has attained the triple bodies and all the siddhis. His disciples also verified the facts.  His aged body became youthful again.  He had the physical appearance of a young boy before the onset of puberty.  His body no longer needed any sleep, had no need of food or water.  He writes that he had developed immunity against all destructive forces and that his physical body had been filled with divine light.  The Arutperumjothi, Divine Light, changes the very structure of the DNA and RNA in each and every cell of the body.   The Lightbody does not cast any shadow.  There are many recordings of incidents that proved this fact in Swamiji.  When he walked, no shadow was cast.   When he walked through the rain, his body did not become wet.  On many occasions he was photographed, only to be discovered that no image was retained on the film!

Swami Ramalingam’s eyes radiated such powerful light, that he always kept the one eye covered with cloth, so as to not harm the person he was looking at.  It is also said that he never looked anyone directly in the eye, but looked beyond them, for the same reason.

He used to cover his entire body with two pieces of long cloth, possibly to give shape to his partially visible and transparent body.

The development of the Prana Deham follows on the Suddha Deham and the ultimate body is the Gnana Deham which takes on the size of the entire universe.  With this perfection comes perfect knowledge of the whole universe.

There are four steps through which to attain all these bodies.  These are :

The modern day sanmarga (path) on only the first step, namely Sariyai.  The other three steps are completely ignored or neglected.

Although Swami Ramalingam emphasised the discipline of living compassion, it is still very important to focus on the other three steps as well.

Swamiji more than once repeated that what he achieved others can achieve as well.  So, it is to continue to focus on his teachings and to put into practice that which he taught.

“The meaning of the Mantras will vary in many measures and interpretations. And hence, our GOAL to be attained is ONLY the (AANMA – LAABAM) Soul-experience or Soul Profit which is the experience or enjoyment of the Divine Bliss (SIVVANUBHAVAM).”Swamiji Ramalingam, the Vallalar.