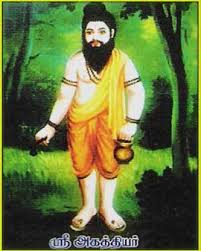 Origin of Siddha and Agasthya Muni

In Dravidian mythologies the birth of diseases has been attributed to a misunderstanding between the two primal forces, creation and sustenance. The force of creation (Brahma) and the force of sustenance (Vishnu) went into a clash that resulted in an aberration of the creative force which resulted in the creation of diseases. A solution could only be then mediated by the force of destruction (Shiva) who was not involved in this quarrel. Lord Shiva enclosed his sperm inside a ceramic pot and created the first test-tube baby, who matured as a great sage, Agasthya. Agasthya was born with tremendous knowledge and wisdom. Agasthya further developed this knowledge base with his father’s help and time witnessed the maturation of Agasthya into a great sage and scientist. Sage Agasthya never grew physically, attaining the height of only three hand spans. He developed Siddha Vaidya into the great medical science we see today.

It is said that when the first leaf of the first plant (It was a grass named karuka) sprouted on earth, Agatshya was there to witness it. Henceforth each plant, each animal, each element, each mineral and each non-living thing that were created thereafter appeared to Agathya muni and explained its innate properties and medicinal values to him. This vast knowledge forms the foundation of drugs preparation in Siddha Vaidyam.

Agsthya muni is an immortal saint who achieved the light body and is known to still live in the Western Ghats especially near to courtallam and agastya malai. It was sage agasthya who originally taught and transmitted to several of his disciples over the ages the Kriya yoga techniques of divinising the cells of the body and to achieve the body of light.

Siddha medicine being an ancient medical science, is has a strong history in ancient civilisations, spirituality and mythology regarding its origin. The historical explanation is based on observations from archeology, oral history and philological findings. Oral and written histories—as evident in the Vedas, the earliest of Indian writings that are decipherable—allude to earlier civilizations.

In ancient India, people of knowledge, science and wisdom were known generally as sages, and they were respected and played a pivotal role in modifying the society. They were the generators and custodians of philosophy and the knowledge base. Archeological excavation in India on many ancient civilisations reveal how developed past civilisation were, adavanced enough to match with our modern days amenities. This is the Dravdian civilisation, the most ancient and the cradle of humanity. Dravidians were advanced in many fronts of knowledge, especially spirituality. This civilization was cosmopolitan in outlook, welcoming different races and people into their culture, allowing them to live in peace. A society of communal living, equality and based on love and peace. The strong spiritual backbone of the society has provided the necessary cement that bonded the humanity in this civilisation. Archaeological findings show statues of people in meditative and yogic postures which was never seen in other excavation sites of other civilsations around the globe.

It was into this civilsation, the Siddhars were born into. Their ageless wisdom in form of 64 arts, including medicine, became the foundation of the Dravidian civilsation and many other civilisations in the world. During the Aryan invasion of India, the dravidians were pushed to the south of India, now th modern states of Tamilnadu and Kerala.

The earlier writings of Siddha medicine still lay untranslated, as there are no keys to the Dravidian script that can link it to more modern languages like Sanskrit. From the place of origin in the Western part of India, Siddha Vaidya traveled with the Dravidian people as they moved south and established a home base in southern India.

When we reach back in time to reveal the gift of the Dravidian culture’s stunning medical system of healing, we are also reaching back into our own conception and healing the fundamental actuality and idea of disease in our body/mind/heart/spirit at the atomic level of its origin.

Today, many theories have been put forward by scholars to explain the origins of siddha system of medicine including the theory of the lemurian origin where siddha originated

from a land mass called the kumari kandam. Kumari kandam is considered the cradle of man, which was slowly lost under the sea over a period of 3500 years. The lanka of Ravana is also supposed to be located in this Kumari kandam. Sage Agasthya and his disciples then led civilizations out into Java and ambodia and Central and South America, during the inundation of the kumara kandam, and spread into different areas world later popularly known as legends of the Incas, Mayans and Aztecs of South America.

Will continue in part 3